Younger & Older Players Being Important: Part 1- Benefits of Being Around Maturer Athletes 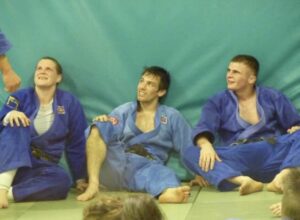 Thanks to Vince Skillcorn having me on his Judo Talk podcast I now have plenty more writing ideas. I use the notes app on my phone to jot down anything that springs into my head, in the case of writing this’ll normally be about any subject that I think I could make a post out of. I tend to hit dryer spots which I think lately has predominantly been down to not doing loads of randori during to the current world situation. I find ideas tend to come in bulk then followed by another blanker spell. For content that I scan, largely, I have been relying on prominent memories, re-reading my diaries and Judo/sport related literature and, listening to the growing wealth of Judo podcasts out there.

Anyway, doing the podcast for Judo Talk sparked a few ideas. A subject that Vince and I touched on was support opportunities for older athletes. I won’t go into full details on my reply to Vince asking, from a systemic standpoint, do you think the older players are quickly forgotten? In my answer I discussed how vital I think the older Judoka are in the developing of the younger fighters. I mentioned that I though it was very good for the younger players at Camberley to be practising with people like Ashley McKenzie, Frazer Chamberlain, Nathon Burns and myself. For the sake of this week’s post, I’ll discuss the benefits that I believe the older athletes bring to the younger players then, next week, I’ll outlay how beneficial it is for the older athletes to be around talented and hungry young fighters.

I wrote recently about how, from my observation of great coaches, coaching goes far beyond the basics of teaching and, how important information can be divulged to athletes in a less obvious manner; casual conversations, texts etcetera. I will begin, in a slightly different context, to reiterate those points.

For me, as a younger Judoka, I remember how good it was to practise with people like Winston Gordon, Euan Burton, Craig Fallon, Peter Cousins, James Millar. These were the men in the generation above me and I watched all of them on DVD then, as I matured, with my own two eyes saw all of them do serious damage on the international scene. Growing up in rural Shropshire, being able to grip up with players like that, although on the worse end of it, made those successes, even if very hard, seem achievable. It didn’t feel like it was an impossible feat because at the end of my two arms was living proof that it could be done.

I found practising with those players further installed the ability in us younger players to be able to fight for our lives. We literally had to give everything that we had just to try and stay on our feet. It extracted the willingness out of us. It forced us to fight. For me, I also found that I had something to measure my ability on. If I started to catch someone in randori that had won a European Championships medal I began to really believe that I could beat players at that level. At times I would literally stand in the tunnel on the way out to fight and say to my self, “well, he may be good but he isn’t as strong as Craig, Euan or Winnie.” Ultimately, I wasn’t as successful as those men but, doing randori with them regularly absolutely contributed to my development. By the age of 22 I was having close fights with, and beating, a number of European, World and Olympic medallists. Fighting those older British players week in, week out, was a solid gateway to progress.

There is also a primal level of coaching that takes place in the younger athletes being around the older players. All those lads were fantastic with us younger players, constantly giving us moral support, technical and tactical advice and, a few times, when on training camps, if the foreign opposition would dish out a beating to one of us youngsters the older lads would go and ask them for the next round of randori.

It is also of my personal belief, having done a number myself, that so much about performance Judo and coaching cannot be learned on an academic course. Not that I don’t see value in them but, there are so many elements that can only truly be gained from going through the wringer oneself.

I think one of the more obvious, but less discussed, elements of coaching are the areas that are rarely, if ever, mentioned but always on display. I feel like I have learnt as much from anyone by just observing them. I’d gain technical ideas by just watching the older players do randori. I also found sharing rooms with maturer athletes incredibly formative. In the London 2012 Olympic cycle, for a fair number of trips I roomed with Euan Burton. Ashley McKenzie regularly shared with Winston Gordon. For me, seeing how professional Euan was, with his training diaries, supplements, nutrition, punctuality etcetera rubbed off on me. Unless I asked he never said, “this is what I do.” I quite literally just watched him, then somewhat copied and mimicked. I have notes on observations of attributes I liked from all those mentioned maturer players. Again, it’s a real primal form of development and, a very important one. An area an organisational psychologist would have a field day with.

From a group standpoint the older players can not only potentially still deliver results but, are a vital part of the natural cycle of developing the younger athletes. Obviously high performance is geared towards results so it doesn’t matter if the best player is 15 or 30, the best is just the best. That said, I do favour the concept that backs the younger athlete over the older if ability and performances are similar but, in terms of development and creating a revolving cycle of quality fighters and coaches, then players of all levels and ages are as important as each other.

Next week we’ll discuss, on the flip side, the benefits that the younger athletes bring to the older players.

Don’t forget to sign up to my FREE weekly newsletter, Judo’s Weekly Weigh In, here!