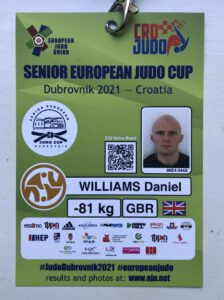 For the majority of our seniors at Camberley Judo Club last weekend’s European Cup in Dubrovnik saw us return to competition for the first time since the pandemic kicked off last March.

My last tournament was actually mid 2019 sometime after which I said “no more” to making 73 kilograms. For a short while after that point I was very unsure about what my future in Judo looked like; I mean, I don’t foresee a point in my life in which I’m not involved in the sport in some way but, regards to fighting, I really didn’t know what may or may not lie ahead. With the support and guidance around me I continued to train at a lesser volume and lower intensity for a period of time and, on thinking if I ever did fight again it’d be at -81kg, gently geared the training a bit more towards putting a little more muscle on, which didn’t take too long. After not many months I began to feel the want to fight again but told myself to just continue enjoying things at a slightly slower pace until the Olympics were done, then, if I still fancied it, I could fight. Then covid-19 hit us and that was that.

One thing I’ve thought about for a number of years is how many full time Judo players, on walking away from the sport, go from training 2-3 times a day to, the next week, not stepping on the mat at all. When we could return to training on the lifting of the lockdowns I decided to play around with the training and see what the minimum was I could get away with. I pretty much settled on 3 randori sessions per week, 1-2 Judo technical sessions and 2 short strength sessions. I found that a manageable number to fit around taking on a bit more paid work. I did think I could add some more fitness preparation in during the build up to events but, honestly, couldn’t muster the extra motivation to squeeze it in around working, coaching and the training I was already doing. I spoke to my coach, Luke Preston, who put it pretty straight to me, “you look in good condition in randori, when the tournaments start back just go and have a fight.”

*Note, obviously like most competitive players in their late twenties, early thirties, I have a large training history; starting Judo in 1994 and being full time since 2009. Requirements for maturer and younger athletes can differ drastically.

I began, for the first time since the beginning of the pandemic, to begin teaching 4 sessions (2 days) per week at a school in Reading from September again. For probably a month or so leading up to the tournament in Croatia I started to question whether I did really want to fight. I actually got to a point in there where I thought that I’d be quite happy to go to Croatia and not enjoy it, then I could at least put competing to bed knowing that it had run it’s course for me. I know myself well enough to understand that I was tired and adjusting to having full days again. I’ve spoken previously about being a self funded athlete and how difficult I found trying to do all the paid coaching and work around training to support myself and, how I struggled to stop it driving me into the ground. One lesson I can take from that time that I can now apply is ‘offsetting decisions.’Instead of planning and letting my thoughts run riot I can put them on the back burner until after that time, not always perfectly but I’m usually there or there abouts with it. Camberley Judo Club also took a large team to the C2 London International a few weeks ago, I went as one of the coaches and loved it, it started getting me in the mood. Tournament day is my favourite part of the broader Judo lifestyle; I really enjoy training, nutrition, weights etcetera etcetera but, I love fighting most of all. After being at the C2 event I started to look forward to getting back on there myself.

Anyway, it was a joy not to have to endure a gruelling weight cut. I had to drop a little weight but controlled it simply enough. I beat a decent Moldovan lad in the first round and, as I was walking through the tunnel from the stadium to go back into the warm up room, I almost made myself laugh with the thought, “Yeah, you definitely ain’t done mate!” In my blog I regularly discuss the absolute importance of players working under truly quality coaches, in day to day training and at tournament, watching that first fight back again clarified that point. It was a close contest and, without a shadow of a doubt, my coach Luke contesting the shidos and calling for them aided in me getting through that first round. My opponent eventually received the third shido in golden score for grabbing my leg as I went for seoi-nage. He was actually going for a strangle (which he didn’t get), something I’d probably have done myself. I don’t like the rule but it is the current one. Luke ensured that the ref and video refs had noticed it and that was it, fight done. It is so often those small things that are the difference between getting to the next round or not; an early shower or getting on a bit of a roll. That is why it is vital to have someone that can read the game in your corner.

In the end I had six fights, winning four, finishing in seventh place. I don’t celebrate placings, too much of that shit goes on currently. We have a saying at Camberley Judo Club, “Never lose a fight you can win,” I definitely had the tools to beat the lad I lost to in the repechage final, I was furious after that. Still, something else I have learned is that too much self-flagellation only harms me in the long term. I actually try to treat and talk to myself as if I was someone I coach, I would never talk to someone else the way I have spoken to myself in the past. I again found that this method calmed me down quickly enough; not fought in 2 and a half years, not done any Judo outside of Camberley in all of that time (shows the level of randori at the club), new higher weight category, self funded while fighting players well supported by their national Judo federations, used new things you’ve been working on, clear identification where the ‘ring rust’ is; not a bad outing for the first one back.

Last weekend was not a grand prix level event but none of these international tournaments, particularly in the fiercely contested mens middleweight categories, are ever lacking in quality or in numbers. Although I wanted to and could have medalled, last weekend adds a positive element towards potentially making the decision to continue fighting seriously.

Without ending on a dour note but, in also wanting to give the reader an insight into the life of a full time Judo athlete, another aim I have for these blogs, I shall briefly discuss self funding again. The tournament in Croatia, including 2 days of missed earnings, cost me just shy of £1,200. I’ve said previously that the only major apprehension I have with continuing to seriously try to compete is having to do all the self funding lark again; I know many others feel the same, it is a large de-motivator. My next tournament will likely be the British Championships in December, I could become British Champion, still be willing to put myself through the wringer of full time training to threaten internationally and still be no better off in terms of opportunity and/or support from British Judo.

In those terms I fail to see now, as before, much hope.