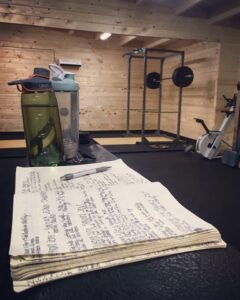 The first time I came across the idea of a training diary was, as a 13 year old, reading Neil Adams’ A Life in Judo. Adams talks about his strength and conditioning coach telling him to keep a record of his training but, from there, finding it such a useful process, he would write lots of different things in his diary. From then I’ve been pretty consistent with writing down the main aspects of my day to day life in sport.

For me there is a spectrum that all competitive Judo people fit upon with regards to their natural inclination towards ‘sports science…….closing the inches………the marginal gains theory’. At one end we have the incredibly gifted, raw individuals that can just turn up for training, bang people over, and then not think much about it all until the next session. Then, at the opposing end, we have those people that pay a lot of attention to nutrition, strength and conditioning, training diaries, video analysis, research etcetera; for me, not all but in most cases, the latter here tend to be either initially lacking talent but build it slowly through constant effort, research and application, and/or those that lack confidence and obtain it by doing everything they possibly can. All athletes that I know lie somewhere on that spectrum. 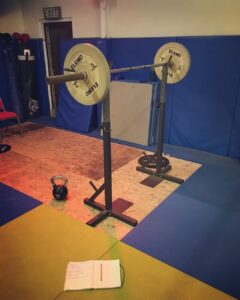 There can be a perception from people that aren’t heavily involved in sport that all individuals at a high level lead a very ‘professional lifestyle’; weighing food, have a fantastic understanding of nutrition and strength and conditioning, that every millimetre of their day is measured towards performance. Honestly, for Judo, a lot of the time that really is not the case. There are, of course, those sorts of people but for as many of them there are just as many of the former, raw, almost crazy individuals that don’t necessarily lead the kind of lifestyle that some may expect. This is something that my coach touched on in a recent podcast. Something else that he has also said to me in the past that is relevant is, “it’s a fight before it’s a sport.” A lot of fighters that I know, particularly some of the really good ones, tend to, in simple terms, not give too much of a fuck. Again, not all but the larger majority. Occasionally you get a player that has the natural ability and also pays great attention to all the supplementary areas, they tend to be rarer though, and when they succeed they do it exceptionally well. Neil Adams himself being a perfect example of that.

For me I probably lie somewhere in the middle. I do enjoy learning about and implementing advantages that can arise through sport science application. I have found taking these to an extreme can actually have a negative effect however, even when I’m relaxed I still tend to be pretty disciplined. I think for people like myself, not having natural talent in abundance, to get as far as possible, regular discipline, even if loose, has to reach across the majority of the lifestyle. 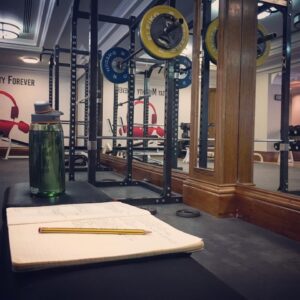 Nowadays I tend to mainly just record my training. I have in the past recorded things like my sleep, nutrition and mood. I find it easiest just to write down my training, body weight when coming up to events and, notes on anything that I think could be useful. I found starting with just getting the training down was the best way to build the habit. I then experimented from there but have largely ended up back where I began.

I prefer a handwritten diary. It lives in my training bag so I always have it with me. I know some players prefer an electronic version but for me I can get distracted if on my phone. I also feel like I’m more reflective with actual pen on actual paper.

I treat writing in the diary as part of the session. I’ll do it as soon as possible after I’ve finished to make sure it gets done and, to ensure I don’t forget something that may be useful to jot down. Particularly after randori (sparring).

Again, particularly useful for randori, if there is something important I want to remember or comeback to the diary ensures that I can. It might be how I need to tweak a technique or an answer for a certain style of opponent etcetera. I don’t write about every minor detail of the session, just anything that stands out. Every so often I’ll go back through the diary and the amount of info that is in there is surprising and useful; for my time left fighting and, probably even more beneficially, if I ever move into full time coaching.

My coach also said to me a long time ago that a strong percentage of good players, to a degree, coach themselves. Having a quality coach is absolutely vital but developing a reasonable level of self-sufficiency is also important. All the benefits of the previous point are included here but from personals points of view I can, for example, although far less nowadays, get frustrated during training. Writing it down in the diary, and what my reaction should be to certain situations, I find very therapeutic. It’s like I’m slowly practising and drilling making the correct decision into me. 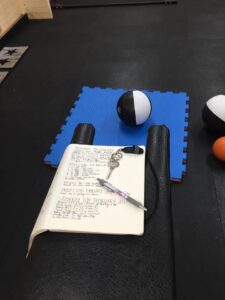 Through phases of physical training, I’ll use strength training as the example, recording exact scores can be very useful. Let’s say I bench press 100kg for 3 repetitions, I write that down then the following week I will aim for slightly heavier. Pretty simple. Same with rowing output scores, running distances and times. I used to live and die by these scores which came with a high level of personal pressure, which served me well for a long while. In this later stage of my career I see them more as something to aim at. The diary still ensures I know where I’m aiming.

Judo is obviously a weight controlled sport and, as a senior, most players will eventually have to do some weight cutting in order to make their fighting category. I found recording my morning body weight each day for 2-3 weeks before tournaments really helped me understand my body, and to learn how to lose the weight the best way that I could. I’ve had professional help with nutrition but this method ABSOLUTELY aided the weight cuts and my confidence around the whole process.

When All is Said & Done

Becoming Olympic Champion is most serious Judo players ultimate dream however, nearly everyone that goes for it falls short. Some get closer to it than others but most finish with a feeling of not achieving what they initially set out to achieve. For me, I got to a point where, at 30, I just couldn’t handle making -73kg anymore and, didn’t want to continue living the financial lifestyle required in the present conditions to train full time. I had a period around that point where I thought that might be it, that my competitive career may possibly be over. This time overlapped into the first lockdown of the pandemic and, one day, with not a lot else to do, I got out all my old training diaries (there’s volumes!) and read them all in chronological order from cover to cover. What I read was someone that yeah, wasn’t the best in the world, could have done loads of things differently and, had plenty of personal struggles and failings but, couldn’t have given much more of himself to it. Committed. I found it an emotional thing to do but the sense of relief it brought was amazing. Although I’d still like to fight again it felt like a form of closure of my time up until that point. Since then I’ve noticed those thoughts of, “but what if I’d have just done this or, what if I’d just done that” are very rare and relatively easily dispelled.

I found being able to see all the effort, research, struggles and successes right there in front of me a powerful tool in the letting go process.

Desire can be a bastard!

Sign up to get my FREE weekly newsletter, including an early release of these articles, straight to your inbox!