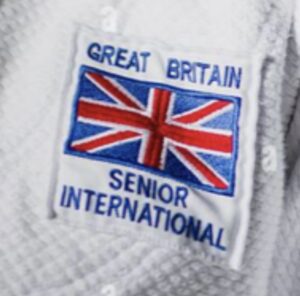 At the time of writing I have enjoyed the past week containing the 2022 World Judo Championships, which took place in Tashkent, Uzbekistan. Like a lot of the British Judo community I’d have liked to have been able to watch and support more British males at the Worlds, two were sent. We’ve oft times been told the future is being prepared for. Looking at this years Junior World Championships though, and also seeing only two male GB participants, leads to furthering confusion and deflation.

I decided I would retire from competitive Judo at the end of 2021. Something I’ve become aware of in my own day to day life is how important it is for me to have things to aim at. Goals were always there as an athlete but I suppose I’m just more conscious of them now, and the importance of them being in place. As a full time competitor most small goals are generally geared toward ones ultimate target. I found it took a little adjustment when that ‘ultimate target’ was removed upon retiring. I am very fortunate though to have many experienced people at hand to talk to about such things; two clear messages that came out of all of those conversations were, to carry on doing some regular training and, to spend a little more time trying some new activities. I had made a list of stuff I’d like to do after finishing competitive Judo. Literally anything I think I may fancy having a crack at I put into a list on my notes app. Here is the top of it:

I was speaking to Jez, a friend of mine, shortly after my final tournament about some of the stuff I wanted to have a go at. “I know someone that used to be a competitive sprinter, let me see if they know anyone,” said Jez. 5 days later I find myself down at an athletics track, pigeon legs on full display, training with Mas Musa of Cornerstone Performance for the first time. I’ve pretty much done a session with Mas every week since the start of the year. I really enjoy the sessions and Mas’ coaching. Early on I occasionally found myself thinking, “what the hell are you doing, you’re not an athletics athlete….you don’t need to be doing this….save the money…just stick to what you’re good at.” I’d never think that during or after the actual sessions, more so in the two or three days leading up to them. As soon as I’d start the session they would dissipate. After a month or so in I was firmly resolute in wanting to continue. I’m certainly not a natural, I’ve joked with a few people I know how hard I found it just to lift the opposite arm to opposite leg, and still do at times! 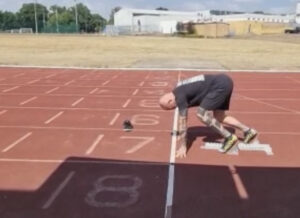 A big thing that keeps me motivated is having a time I’d like to be able to run 100 meters in, it’s one that would be very unexceptional to serious senior sprinters but I have noticed that keeping it rolling over in the back of my mind has given me something to aim at. It keeps me turning up and doing extra bits of training throughout the week, and making a financial commitment to it.

Those couple of points, small male GB entries at major championships and, having targets to aim at have been churning over in my mind a bit lately. Particularly regarding the junior selections, it made me think of a point in my own junior career that I see as the tipping point that led me to commit fully to a senior career in Judo.

I took a bronze medal at the 2007 British Junior Championships held in December, which put me onto the national junior (-20 years as it was then) squad for the first time, in my last year as a junior. For winning a place on the squad every squad member was sent to the Bremen International Tournament, this was paid for by the BJA. You received your British team tracksuit and junior squad badge which was the Union Jack and the words ‘British Junior International’ written above and below it. Working towards potentially receiving the senior international flag someday added further motivation. It was a great source of pride being selected to represent the country and, in line with the topic of this post, provided great motivation to work hard to do well at the National Championships each year. There was something very clear to aim at and, if achieved, the rewards would be received. 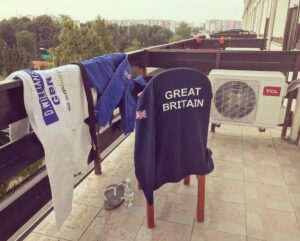 To then go on further, were you to do best abroad and be British Junior number one you would receive further, bigger selections. Clear and realistic markers for everyone to aim at.

At the 2008 Bremen International all of us -73kg lads failed to medal so, with the what are now Junior European Opens, they decided to send the number one and two to the first two events. No placings or medals. They sent the number three to the third, no placing or medal. I, along with Owen Livesey, who was younger and recognised for having good potential by national junior coach Darren Warner, were sent to final event, the Junior Polish European Open. Although I had been going abroad to fight for six or seven years at that point I had never got into a medal fight at an international event previously. Five wins and one loss later I found myself with my coach at the time, Bill Kelly, in the stadium cafe during the few hours break before the medal contests were to take place; I would be fighting for bronze. As clear as I’m staring at this laptop I remember looking out of the window thinking, “you can actually do this, Danny.” I suppose up until that point I’d not actually really believed I could be a competitive international player. I wanted it, I considered myself a hard worker but, didn’t actually consider myself at that level. Myself and a Portuguese lad got stuck into each other and he came off best in a close affair, which left me in 5th. At the time I was gutted I hadn’t medalled but was definitely left with boosted optimism. I believed then I could go further than fifth places and juniors. Off the back of that tournament I was then sent to the Junior European and Junior World Championships where I did not medal but did win contests. Again I was annoyed I failed to medal but the belief that I was not an imposter at international level solidified further. At the Junior Worlds and Junior Europeans I attended GB fielded nearly full mens and women’s teams. I met my coach, Luke Preston, through that period on the Junior Squad and was encouraged by Darren Warner into full time training. A matter of weeks after the Junior Worlds I went to Camberley Judo Club to be a full time British Judo player and remained so for the next 13 years.

I look back at 2008 and that 3 month period, starting around the Junior European Open in Poland and culminating in the Junior World Championships, and that was the absolute tipping point into full time Judo for me. I was 19, had work, was in education and had begun some savings towards my first property, I was actually in discussion with a mortgage advisor. That period helped me to decide to put my Judo first. I certainly wasn’t the most successful British Judo player of my age group but I was one of a handful that was still training full time into their thirties, whose career ran it’s full course. And of that group I’m part of an even smaller number that has transferred into coaching. Something I foresee myself doing in Britain to some capacity for a long time. I genuinely wonder at times though, without that trip to Poland and the subsequent opportunities from the national coaches, support and selections, whether I’d still be doing Judo at all anymore. On observing the criteria for the major Junior selections over the past five or six years I know, were they in place in 2008, I would have very probably not met them, therefore not enjoying those opportunities that were open to me back when I was a junior. I ask myself what negative affects things like that may, or may not, be having on both numbers of males remaining in the sport and top end male results.

More importantly to me now, as a cadet coach, it makes me consider how to tackle such obstacles over the next two or three years as some of my athletes come to that point in their lives.