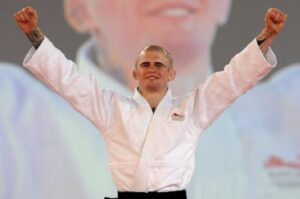 “What will I do when all of this (competing) comes to an end?” That is a question I’ve asked myself since I was a child. I suppose in times of more desperate uncertainty I could translate that to, “HOW will I COPE once this is all over? Thankfully, after speaking to many other athletes, I began to see that those thought patterns aren’t all that unusual.

At the back end of 2021 I began to arrive at that destination. As of March 2022, pretty much 28 years from first taking up Judo, and 13 years after making the plunge to become a full time Judo player, here I find myself, a retired athlete.

In October last year I competed at the Croatian European Cup. In the build up to the event I had familiar thoughts of “do I really want to do this anymore?” Although, realistically being at an older age for a Judo player, I chose to temporarily put them to the back of my mind; my thoughts would occasionally go to those places through points of my career, I suppose as a part of the inner dialogue that attempts to escape the pressure tournaments can so often bring. I told myself that for the sake of doing one competition, to see whether I did still want to fight, then it would be a worthwhile investment of both preparation and money. If I didn’t enjoy it then at least I could put competing to bed for good.

Considering I hadn’t fought for two and a half years I went to Dubrovnik and felt pretty good, really good actually. I strung a fair share of wins together and took out some quality opposition. Although annoyed that I got into the placings but failed to medal, I was happy that I could be competitive at the new higher weight category of -81kg; Croatia being my first proper crack at that division internationally. I didn’t just enjoy the tournament day, I loved it. Although I felt like I’d been hit by a train (happens in your thirties apparently) I was still buzzing for about a week after, during which I put my entry in for the British Championships taking place in December.

Regarding knowing when to retire, and I have no idea why I thought this, just that I did, I’d always presumed that one day I would just fall out of love with fighting. Would cease to enjoy competing. I have always kept personal and training diaries, I find writing an extremely useful way of organising my thoughts, or to recognise how bonkers some of them can be! A few people close to me encouraged me to stick even tighter to writing through the prep for Croatia, and the weeks following it. About 10 days after the tournament, while journaling, I wrote a question to myself, “Will you ever fall out of love with fighting, Danny?”

As I read the words back to myself it was a bit of an avalanche of self realisation. I don’t foresee a time when I would ever not enjoy competing; tournament day has always been my favourite part of the broader athletic lifestyle. I knew then that I would have to make my decision on everything else.

I have previously written, quite extensively, about the requirements of full time Judo players and, of those athletes that self fund due to their rejection of the current performance directorates centralisation policy. I won’t go into too much depth again with these here but, will touch on the major things I had to consider in formulating a decision to continue or not. Regards to ‘sacrifices,’ for most of them I had never viewed them as such, full time Judo was the thing I wanted to do most and they just enabled me to live that life; some grated a bit more as I got older but, I still wanted Judo more.

Through the lack of Judo during the pandemic I finally realised what it was to have a more relaxed lifestyle, evenings had always been a bit of an enigma prior! I had time to do things that I’d never really had the time or energy to try out, which I thoroughly enjoyed. I took on more work through 2021 and began to earn close to an average wage for someone my age; it was nice having some more financial security and beginning to put some savings together. Obviously we choose to do it but the pandemic opened me up to seeing some of those requirements demanded of full time Judo players as sacrifices.

Anyway, listed below are the major points I had to consider, firstly from a lifestyle perspective:

I began to really not enjoy feeling physically and mentally tired from all the training, and all the work around the training.

Although I still enjoyed some training, particularly randori (sparring), I found for an ever a growing number of sessions I felt like I was having to drag myself to them.

I enjoyed saving and having a bit more financial security- Croatia, a training camp in Germany and the British Championships cost me two thousand pounds. I saw a large chunk of the savings rapidly gone. This hadn’t bothered me so much in the past, it did now.

I have aspirations to own my own property someday, currently in a small single bedsit that someone from the Judo Club kindly does me on the cheap.

I believe one should gear and shape ones life conducive to achieving  ones ultimate desired outcomes of life- particularly important considering those last few points.

Things I considered from a performance perspective:

Although I believe I potentially could have bettered my results with more opportunities from the national governing body, I’m realistic to how much I could have bettered them. I feel I understand competitive Judo better than I could actually do it. When I look at the requirements to reach the very pinnacle, i.e to win Olympic and World medals, I honestly don’t believe I had the full set of polished tools needed; don’t get me wrong I always believe in ‘the punchers chance,’ and on my day I could beat some of the best in the world but, consistently beating lads of that standard, at their peak, event after event, was probably beyond my abilities.

I’m pretty comfortable with that previous point. I was a good international fighter and I’m proud of what I achieved. Again I believe I may have bettered my international results slightly but everything that would have to be put into that for the slim chance, of a small improvement in results, no longer weighed up for me. Particularly as my own analysis eventually said to me that I didn’t have the skill set to finish on the podium at the Worlds or Olympics- which were my ultimate targets.

I know how much I put into my career, although I know I could have done many things differently I don’t think I could have given anymore of myself to it, which has brought contentment. With those years of effort if the massive results were going to come they would have come already, regardless of any external situation.

Considering the financial discussion and a lacking desire to put myself through all the training, in the last couple of years I would often ask myself, would I continue if I was offered full financial support and could live and train where I thought best? The answer is finally, no. I simply no longer want it; which is a surprisingly nice, freeing feeling.

After writing all that down I literally woke up the next day and it was like someone had flicked a switch in me. I was pretty sure I’d had enough. I was tempted numerous times to withdraw from the British Championships, I had said I was going to do it so wanted to finish properly. I got through those last weeks telling myself that this will be for the last time. I didn’t feel great at the tournament, I felt tired and sluggish through the earlier rounds. The only fight I felt like myself was the final, amazing what a good break, 2 red bulls and a pack of jelly babies between a semi-final and a final can do! I lost the final and barely cared, which again told me more of what I already knew. My thoughts confirming the decision to finish only continued to grow stronger from that point.

I feel I am retiring in a good spot. I still enjoy Judo and many forms of training. I am healthy and not injured. Not in debt. I am really enjoying coaching. I feel largely content with what I did and didn’t do, I rarely find myself thinking “what if?”

I have been very lucky through my full career and have many people to thank, none more so than my mum and the rest of my family and all close friends. Luke Preston, who I believe to be one of the best and most committed people in world Judo. Luke has taught me so much, both on and off the Judo mat, and has stuck by me through thick and thin. Everyone at Camberley Judo Club, the support at the club has been, and still is, exceptional. The other people and support staff I operate under, in particular Ben Rosenblatt. All the other coaches I’ve worked with previously, especially Bill Kelly at Wolverhampton, under whom I spent my junior career. Big thanks to Becky Lyndon and to Paul Ehren. All sponsors and all supporters, particularly those from within in the British Judo community.

Again, back to that initial question. Currently, I really don’t know. I love the coaching I do at Camberley Judo Club, I don’t foresee a time that I wouldn’t be operating at the club in some capacity. I decided I wanted to become a seriously competitive Judo person after watching the 1996 Atlanta Olympics, pretty quickly I formulated the idea that I’d like to be a full time coach after being an athlete. I was 7. That desire to coach still hasn’t left me however, I look at the current situation for potential performance coaching in Great Britain, I consider how I, my peers, and many of the best coaches in the country have been treated over the last 9 years and I ask myself why, at a point where I can still go and do something completely new, would I actively pursue that path? I am a passionate and driven person, I think I can make a success of most things I may turn my hand to. But, we’ll see. Things may change. If not, I’m interested in plenty of other things and believe I can be still be fulfilled doing something else. Some days I do feel pretty lost regarding what’s next, which I know isn’t exclusive to retiring athletes, that is part of the human condition, many can feel like that. However, as opposed to despondent, I remain largely optimistic and positive about the future.

And, I have time. For now I am very content with the decision to retire, and am grateful to have been able to have had a long and enjoyable career.

I’ll finish here with a quote I enjoy:

I think I got that second bit.