Judo & Chaos: Preparing for the Worlds Most Unpredictable Sport 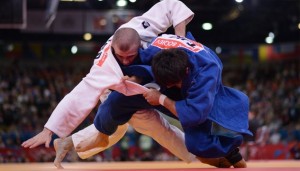 One specific champion sprung to mind as I’ve begun to think about how devastatingly unpredictable Judo can be. Ryoko Tani (previously Tamura) was the greatest female fighter of her generation. Her story shows elements of how chaotic, cruel and attainable for anyone Judo really is. In the Atlanta 1996 Olympic cycle (4 years) she lost only once out of a total of eighty-five contests. Unfortunately for Tani, already winning both World Championships in that Olympic cycle, that single contest loss, was the most important one to her. The final of the Olympic Games.

It may well be the thing that still attracts me the most to Judo, and all the other combat sports, the fact that anyone can win. There is always considerable room for ‘the punchers chance’. Unlike events like sprinting any body type can adapt a style of fighting to be highly effective at Judo. And, even amongst the other combat sports, where else are combatants encouraged, demanded even, to consistently go on the front foot. Even in boxing or MMA, if required, a fighter can go on the defensive for a number of rounds; we regularly see Judo players receiving three shidos (penalties) and therefore being disqualified for non-attacking within 60-90 seconds.

For me there is only one single way of measuring Judo athletes, and that is tournament results. Other than that it is pretty much immeasurable. We are not governed by distance and time. For all the advances the world makes with sport science it should never be forgotten what Judo is, a fight. I worked with my now coach, Luke Preston, on the national junior team before I moved to Camberley Judo Club. One of the most prominent things anyone has said to me in my career was what Luke said as I was in the tunnel about to walk out and fight a Bulgarian lad at the 2008 Junior European Championships, “It’s a fight before it’s a sport.” The further along I get in my own competitive career, and as a coach to kids, the stronger that statement becomes.

I’ve been lucky in my time to have worked with some amazing coaches as a senior; at Camberley, Luke and Mark Earle, on the British team people like Billy Cusack, Juergen Klinger, Darren Warner, Go Tsunada. Through working with them and listening to them speak about their theories and philosophies yes, they stress importance for technical and tactical training, demand strength and conditioning work but, underlying it all is the emphasis on the importance of, the ability to, and the willingness to fight.

When I think on how to train the kids that I lead at Camberley I also often think back to my time as a cadet (-17yrs) under legendary British cadet coach, Brian Moore and, particularly of what Brian demanded of us. I don’t ever recall not being invited back to training because I got thrown or couldn’t bench press a certain weight, in fact none of that was ever mentioned. It was really simple with Brian, as long as you got stuck into everything and gave it your all that was enough. Don’t get me wrong, if you didn’t do that you were told pretty quickly but, you clearly knew what was expected of you. The emphasis was on fighting and on effort. Obviously high level sport is about winning, period. I’ve actually found though that as a senior the best coaches I’ve worked with and seen echo that same message; it is the willingness to just get on with and do the bulk of the work that is the most important underlying element.

A couple of things that I’ve seen repeatedly, and sometimes worn the shoes myself, in the 12 years that I’ve been active in a full time setting can also highlight the previous point of competition really being the only measure of Judo ability for competitors:

Pressure can be very real. There are many, many players that can be fantastic in randori (sparring) but that fail to deliver a similar performance under the white hot heat of contest. Obviously a lot of great players look strong in both randori and in contest but there are plenty of ‘randori champions’ out there, look fantastic in training but can’t quite emulate those performances in competition. That may come down to many different things such as fear of losing, being unable to alter the fighting style to suit contest rules, lack of tournament exposure etcetera. Many players experience and can be hindered by such things, even some of the best. There are even a number of great fighters that actually underachieve because of these experiences and how they can negatively affect their larger decision making, this can often be missed by the untrained eye because they are somewhat blinded by the impressive medals and titles that are won by such players. Again, the importance of a quality coach being vital.

2. Emphasis on the Inches

I’ve touched on this a number of times recently. Again, I have spent time on the wrong side of this line myself. Too much emphasis on the supplementary training (things like strength and conditioning) is often a trait of nervous people. I stress the ‘too much’ there as supplementary training is important but it should NEVER detract from Judo. It should do what it’s name suggests, it should supplement. This is not the case for all but a lot of times the people that overly stress and rely heavily on the results of the sports science side of things, systems, programmes, are the ones that regularly underperform in Judo. I’ve seen that in both players and staff. Obviously a lot of that I think is psychological, something I’m not educated enough on to comment with conviction, merely a pattern that I’ve observed. Although not the best in the world it is something I’ve noticed in my own career, when I just got on with my training but didn’t try and strangle every little detail I fought better.

For me, becoming an Olympian at London 2012 I had a lot of good fortune; The Games were in London so we didn’t have to qualify through the international qualification procedure, which I probably wouldn’t have done. We had a spot in every weight category due to being the host nation. In Great Britain at the time there were some good lads at -73kg but, as opposed to most other mens categories, there were no ‘big hitters’ in the weight. Double World medallist, Euan Burton, in the division above for example. It was a far more achievable task to be number one in the country and therefore gain Olympic selection. I actually think that 2-3 of the other lads in the weight were technically better than I was but, I was a better fighter, I wanted it more and was willing to scrap for it. I got to that games out of fight and having a very supportive team around me. I didn’t really have a very technical coach until I’d been doing Judo for 15 years already, I was somewhat limited in the technicality aspect. But that is the beauty of Judo, with some outside opportunities and having fight things at a certain level can be achieved. Obviously both technical ability and a strong fighting attitude are needed to become a real world class competitor. I’ve tried to balance that mix more the older I’ve got. It’s something that I try to install in our young players at Camberley too. Both are really important but if forced to pick one I’d pick fight; if I had a quid for the amount of superb but soft technicians that get out fought in contests I’d be wealthy. Again I stress that both are very important but, without the underlying ability to fight very little at any international level is actually achievable.

Unlike weightlifters and runners that can quite accurately estimate Olympic place finishes with how much or fast they are lifting or running in training, in Judo, an athlete quite literally has to fight for it. Obviously in other sports they still have to perform at their best but, in Judo, preparation can be perfect, an athlete can be up for it, yet they can still get banged in the first exchange and it all be over in a matter of seconds. Again another pattern that I’ve seen, and tried, is believing that every element of it can be controlled, that tends to lead to underperforming. That unpredictability, that chaos, has to be accepted. More countries compete in Judo at the Olympics than any other sport, it is fiercely, fiercely competitive. The odds of a junior considering going into full time training to then go on to become Olympic Champion are tiny, minuscule even. If that is accepted though, and they put everything into it then that small opportunity is still a bloody opportunity. And who knows what else may be achieved in the aiming for it.

Ryoko Tani knew too well how cruel and unpredictable Judo could be. But with a huge heart, work ethic, fighting ability and technical reptoire, she picked herself up after two consecutive silvers to go on to win two consecutive Olympic titles.

Judo is a chaotic game. Doing ones bit however, training well but ultimately being ready to go for it and fight, is a good way of perhaps gaining a little harmony out of that chaos.

Sign up to get my FREE weekly newsletter, Judo’s Weekly Weigh In, straight to your inbox!