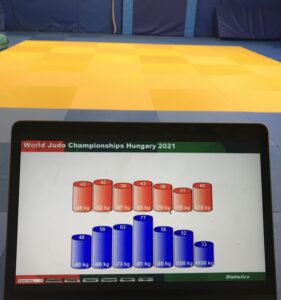 I’ve always been a note taker. I suppose the first record of anything I kept was a training diary after, in my first year at secondary school, reading Neil Adams highly recommend it as a process for improvement in his first book, A Life in Judo. I’m also old enough to remember the mobile phone game Snake 1, with today’s technology though, specifically Apple’s notes app, I find recording anything that’s interesting or potentially useful a quicker and easier process. Particularly with the training diaries, I would not only record my own training but, also, if I over heard anything I liked, or was prominent, from the listening and observing of others.

I’d like to discuss in this week’s post a pattern that I have noticed, and briefly touch upon previously, both in my own personal journey in Judo and, in those observations of both numerous other players and staff.

Important to firstly clarify that I am not a world class coach; I partake in regular coaching but, senior international level is a world away from where I am currently operating. Anything I present here is predominantly from the standpoint of a maturer, experienced player, who has worked with a number of the best coaches in the country, and world, throughout his entire senior career.

I’d also like to stress that what I am discussing here is PEOPLES RELATIONSHIPS with elements of the competitive Judo lifestyle. I will be eluding to such things as programmes, systems, analysis, planning, stats, supplementary training etcetera. All of those things I believe are useful to athletes and coaches, most great coaches I’ve observed seem to employ them all in varying degrees. I again stress that it is the relationship with them that I’m directing my opinion at.

I suppose the idea for this post comes from reading comments on the GB Judo Underground facebook forum. A question that seems to be the most prominently asked is, what is the best system for someone to use for competitive Judo? This is then nearly always accompanied by a few people asking what do people do in other sports or in rival countries? This always sparks questions in my own mind, “When did everyone become so obsessed with ‘systems?’ Do people really think that they are the most important thing to performance?” It is of my view that such ideas are influenced by a myriad of sources, some being; the ever growing grip sport science seems to have on Judo, the way much simplistic (by no means easy) sports like cycling and rowing influence the training of athletes and, the consolidation of information dispersed through coach education.

It seems I’m repeating this line a lot lately but, the more I’m involved in Judo, the idea of an athlete working under a truly quality coach being absolutely the most important element to performance grows stronger and stronger in my mind. I suppose the best evidence I can provide to show just how much I believe in that concept is the financial sacrifice I have made since 2013 to not centralise, so that I could continue to work under the guidance of Luke Preston at Camberley. Even bloody Socrates, himself a keen wrestler and renowned soldier, is said to have claimed that one of the greatest things a young person can do in life is surrender totally to the guidance of an experienced trainer. That is an idea quite literally as old as the hills.

So, anyway, the pattern that I have observed is that the over emphasis on, obsessing over or, prioritising of such things as systems, programmes, analysis, supplementary work etcetera is virtually always caused or accompanied by; over anxiousness, and/or underperforming, and/or controlling behaviour, and/or an inability to really listen to others, and/or not working under a truly quality coach. That last one there is a big one for me, I often find that the people who consistently fixate on such things never have, or let, anyone experienced or qualified enough to tell and show them any different.

Regards to the anxiousness I often feel like the need to control comes from a place of wanting to ‘feel safe’. Judo is a chaotic sport, a lot of the time the diet, the gym work etcetera are far easier and simpler to control. I again believe that it is the anxious side of someone that likes that control, which leads to the over emphasis. I’m not the the bravest person on the planet but, at the same time I don’t see myself as someone that is regularly ‘racked’ with nerves. However, through 2017-2019 I struggled quite a lot to get to 73kg. The weight cuts began to really hurt and I started to dread them. Obviously there is a level of professionalism required but again I am talking about unhealthy relationships; the harder the weight loss became the more I obsessed about it and, the more I tried to control many areas of my life, especially food consumption and training output. I thought more about nutrition and the physical work more than any another areas. Subconsciously, I think I believed that if I found the perfect way to do it, it would hurt less. I pretty much underperformed through that entire period, found it harder to take on board suggestions from others and, ultimately, didn’t really enjoy doing the thing I supposedly love to do. I remained blind to the obvious. It just simply wasn’t working. Now I don’t have to lose a large amount of weight I still remained disciplined, but it is a loose discipline, I don’t really have to think much at all about it. I do implement sport science elements into my work but the Judo itself is very much the main focus. I love training and believe I am a better judo player than ever, results will be the true judger on that one in time though. I don’t believe everyone goes through that same experience that I had, I’m no psychologist but, I believe it to be a very personal cacophony relating to personality and ones own life experiences. I think unpicking some elements of my own journey though has helped recognise similar things in others. I feel that underlying fear can drive people to find the ‘perfect’ way of doing things, to ‘feel safe.’ Unfortunately there is no perfect way, it’s messy. Judo is a chaotic game.

I also do not believe in one track methods of going about things in Judo. I do think that it appears that there are some basic principles that all successful coaches seem to understand but, I believe that there are many different ways to ‘skin a cat’. For me it is one of the most exciting things about high level sport, what differing methods can people employ to get to the top. I believe someone can study it, analyse it, use the data to create a method of training and yet, there will always be opposing evidence to show that other ways work too. I also think that what works for a, by no means easy but, simplistic sport like cycling, doesn’t necessarily work for something insanely multidimensional and unpredictable like Judo. I found that mostly, the best Judo coaches would definitely look at new ideas and methods but, would take them with a pinch of salt. From all of the great coaches that I’ve been around they apparently see coaching as an art, not a science. Sometimes it looks like it is an artistic approach of implementing some scientific methods but, I’ve certainly never seen a great coach look at a new system, programme, bit of evidence etcetera and go, “That’s absolutely brilliant, we now need to heavily focus on that.” I again find that kind of faddism to come from a place of lack of actual experience and/or from not working under a quality coach. There are no quick fixes, nor magical programmes or interventions. Day by day work under quality guidance being the only real key.

Ultimately, Judo is such a chaotic sport the only way to measure it at all is results. Results are all the competitive side of it boils down to anyway. Particularly with trying new methods, sometimes one tournament isn’t enough, it maybe needs a bit more time. I definitely think though, it is important to have the ability to eventually be able to say, “maybe this isn’t the best way to operate” if the results aren’t better than they were before. I wish I’d have been able to do that with my weight, I continued to flog that horse long after it was dead. I also found, and I’ve found this in plenty of other areas too, was that when I did admit to myself that maybe something wasn’t working, all was not lost. On the contrary, it has made me even more confident in the core things that I do do and, in what many of the best coaches have always said to do.

Seemingly, the more new things I try, the more belief I have in the old ones.