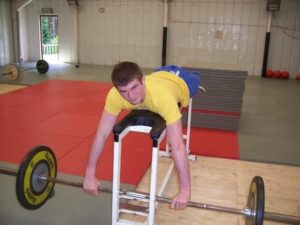 I was having a read through some of my training diaries recently and came across a note that I had made in December of 2019, basically asking myself whether lifting heavy weights was preventing me from combining my attacks. Combinations are something I’ve never been fantastic at. To summarise my style of standing contest Judo would be; pressure and physically dominating to enable direct attacks. Co-ordination is well documented to be affected by heavy weight training, a very important element in combinations and Judo in general. I’ve virtually always incorporated heavy weight lifting into my training schedule, even sometimes when my coaches had set other forms of physical training. Having space from it and being able to observe a relatively clear pattern there has given me some ideas to play around with more when we can get back on the mat.

I wrote a longer article not so long ago where I discussed my evolving relationship with strength and conditioning and where I am currently at with it; the points I’ll raise in this post I suppose are a bit of an add on to that previous article.

Again, just for clarification I am primarily discussing MY OWN relationship with the gym work here.  As I am told by my coaches, I am an athlete with a long training history. Maturer athletes have done a lot more training both on the mat and in the gym than most younger players, their bodies react differently to the training. Also, speaking as a senior middleweight male athlete, I have never encountered a ‘physically weak’ internationally successful player; Judo players have to be strong, there is no way around that one. How strong is up for debate though, strength training needs occur but personally I don’t think players need to be setting national records for the amount of weight that they can shift.

When, in September 2019, I decided to no longer compete at -73kg I had six weeks or so where I didn’t do much Judo, once or twice a week, and mostly just went into the gym and focussed on hypertrophy (muscle building) style training. I was already big for -73kg so it didn’t take me long at all to be at a training weight that I’d like to be comfortable at for -81kg, 84-85kg. Once I was there I switched to more maximal strength style training (lower reps heavier weight) and started to do more Judo again. I found, aside from blowing out of my arse 2 minutes into each round, that I felt extremely powerful with my direct attacks that I prefer to employ, sode-tsuri-komi-goshi for example. I was probably scoring them more than I ever had done before in training. Obviously there are other elements to that, I wasn’t preparing for a contest so the style of randori (sparring) becomes more open but, it was definitely a major point. I was feeling so powerful when I turned in. I still struggled with combining my techniques though, I’d hit the opponent with the initial attack and if they reacted or defended the technique I’d often know what I should then do but it was like my body couldn’t keep up with my partner or with my own mind. I’d put that down to co-ordination and in some cases the need for technical adjustment/improvement.

What surprised me the most, after monitoring my weight and comfortably sitting at a weight that I felt was good for -81kg, was how good I felt when I took a bit more of a back step from the weight training. I actually started throwing more. For example, uchi-mata is a technique that I’d practised for 8 years or so but with limited success. Uchi-mata often requires feints or reactions to allow for an effective entry, again something that I had previously struggled with. Pretty quickly I started to regularly score it, and I was slowly but increasingly becoming more able to take advantage of my partners reactions to it.

Like I said in that previous article, in that period I was still doing two shorter weight sessions per week but wasn’t really giving it everything I had, seeing them mainly as maintenance work. I structured them so that, in theory, I would be fully recovered for most of the randori sessions. I find it interesting to see how other people approach the physical training. I remember Darcel Yandzi telling me that he only really has his athletes lift heavy weights through one period a year; gym work would still occur but it would be more circuit based as opposed to really loading the weight bar up, keeping players fresher and readier for the mat based training.

I look forward to playing around with this ideas when we can get back on the mat and back to work. Like my friend Paul Ehren, British bodybuilding champion and coach, regularly says in his lectures that I attend at Kingston, the best client you have to experiment things on is yourself. In this latter stage of my competitive career I am really enjoying still learning plenty of things and trying them out. As much as I’m still liking the training and the idea of competing that enjoyment is matched by trialling ideas, that have the potential to stand me in good stead later on down the line were I ever to become a senior coach of competitive athletes. From my observations of the coaches that I regularly look to, my own coach Luke Preston, Mark Earle, Billy Cusack, all I have personally practised with, they were still doing randori long after they had retired from fighting themselves. From what I can see the learning can go on long after the competitive days are done, something I’d like to, potentially, one day try and emulate.

Sign up to get my FREE weekly newsletter, Judo’s Weekly Weigh In, straight to your inbox!