The Art of Pillaging: Turning Uncertainty Into Skill 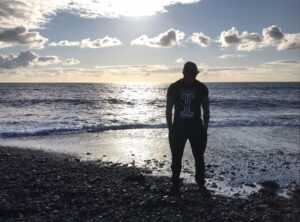 How do I be a man? Those six words are something that have been knocking around inside me since I was very young. I never knew my dad nor, through my entire childhood right up until I left home, was there ever a man around the house. I received an awful lot of love and support from my family and, I spent a fair amount of time with my grandad who provided some of that much needed male tutoring. I was loved fiercely but that question, “how do I be a man?” was always there. I mean, I can make the obvious connection that not having a consistent male role model under the roof that I lived would lead to confusion but, still, I’ve never been able to fully put my finger on where that feeling first came from. The accompanying emotions that I can link to that period of my life are confusion, fear, a sense of abandonment, desperation and intense anger.

I’d long learned to accept that I didn’t know my father by the time that I began listening to Joe Rogan’s podcast, long accepted but never considered the depth of the lasting effects. I remember Rogan talking about his dad walking out on the family when he was a boy and, that for many years, he looked back on it and thought that he was ok with what had happened. With hindsight, as an older person, Rogan said that he could see just how much it had “fucked him up,” how much anger had stemmed from it, how it had shaped him. Never knowing my father, I began to see, played an enormous role in who I had become and how I would operate.

The one thing that always sticks with me, and it is only a small thing in comparison to others, was having to Google how to first shave. I remember thinking at the time that that was probably not normal having to do that, I’m still yet to buy a razor that comes with a full user manual!

I used to think that I was learning things on my own, which is not entirely untrue. I can now see though that it would be more accurate to say that I was learning to copy, which all kids do, however, I was doing it somewhat consciously. I was setting out with the intention to do it. Actively searching. That ‘searching element’ certainly isn’t exclusive to children from single parent households although, from those that I’ve spoken to, it seems to be the case for a lot of them.

When I was around 16-17 one of my friends commented about all the random and weird stuff that I was into. Music was the one I got pulled up on mostly at that age, “you listening to that sixties shite again Danny?” I researched what I liked and would selectively go from there. Regards to the music me and all my friends liked Oasis, I then got into the Beatles after hearing that the Gallaghers claimed that they were a big inspiration to them. Of all the Beatles I preferred Lennon, got a Lennon cap, military jacket and read that Lennon loved Elvis and read Alesteir Crowley. I then listened to Elvis and researched Crowley, and so on. I was like this in virtually every area of my life. None so more with the searching of what it was to be man; how to talk, how to look, what activities to do, what subjects to be interested in, what to wear, what to drink, what job to do, how to interact with others, how to interact with women. I put that great search at the centre of all the early questioning, searching and pillaging that I did. Everything else, similar behaviours, stemmed out from that place of questioning.

With Judo, I obsessively watched every VHS or DVD (showing my age) that I could get hold of. Not only would I take and work on the techniques that I saw and preferred but would also mimic certain aspects of my favourite players; body language, facial expressions, walkouts, kit choice. I did this too with other sports people that I liked, what elements of their game or approach that I thought I’d like to try out or make work for me.

Sometimes I would feel like I was being false, stealing or copying and would be unsure or embarrassed about doing it, even if it wasn’t clearly obvious that I was using something not originally created. Now I look at it VERY differently. My good friend and renowned tattoo artist, Hanumantra, and I have been down this line of discussion many times. Is anything truly original? Regarding art everyone takes influence from somewhere. Even the ancient cultures, such as the Picts, would draw on cave walls or tattoo pictures of animals on themselves, they were just copying what was in front of them. Now that I do it without the flame of desperation, today I see pillaging as a strength, as a very useful tool.

The example I’ll use is myself as an older teenager living in Shrewsbury, where, virtually all of my peers drank, supported Shrewsbury Town FC, went out every weekend, got a job straight out of school, stayed in Shrewsbury, married and had kids. That was somewhat the culture in Shropshire then. Many of them were working an unconscious programme, doing what most people around them did. At that age I wanted to pursue a career in Judo, didn’t drink, ate healthily, went training every night; I worked a conscious programme, I CHOSE how I wanted a lot of the aspects of my life to be like. I loved growing up in Shrewsbury and some of the cultural elements of spending the first 20 years of my life there are still a massive part of my make up, a part I’m proud of. I was lucky that I found something I loved to do as a very young person, and had a family that would support me. It is only as I get older that I can see the difference that Judo made to my life, it gave me the option to choose to do some things differently.

As Malcolm Gladwell exclaims in his book Outliars, certain elements of our culture are deeply engrained, almost unescapable; I still can’t look at an A.F.C Telford United top 😉 I do try and say that I learned to ‘choose’ things differently yet, at the same time, was still very much a product of the environment that I was brought up in; my family all love sport, are motivated and driven, I just reacted to what was around me. As a young man I was desperate enough to search but also lucky enough to be enabled to ‘choose’ some healthier directions by the environments that I was nurtured in.

My friend, former premiership football player and manager, Brian McDermot, regularly talks to me about how he likes to let everything “wash over him,” how he surrounds himself with good people only. I have tried to do the same and to replicate that idea with what I read, watch and listen to. I enjoy reading self development, psychology and philosophy and, as much as I don’t really buy into the “quick fix” idea that most of them are marketed under, I virtually always manage to ‘steal’ something from each book, even if only a small. All those small ideas together can make a really good, individualised lifestyle. I recently read this article by renowned strength and conditioning coach, Steve Maxwell, and have begun to utilise his idea of routinely doing some short mobility work directly after the morning shower. I literally do 30 seconds before I get dressed and I notice that I am a bit looser in the mornings, I like to think that it is solidifying my intent to consciously start the day geared towards my goals too. Sorry Steve but, I’ll not be shaving my arm pits though!

Regards to actively pillaging the way that I like to go about it now is to ask myself two questions; what do I like? And what do I need? I know what I like so I often observe what is connected to that thing; if it’s a person, who inspired them? If it’s art, then other pieces in that genre. If it’s Judo, more elements to a specific style of fighting. If I need to improve at something or a specific area then I either try to search it out or, if it comes to me from a more random or unexpected outside source, then I take note. A highlighter, a notebook and the notes or voice notes apps are great tools for recording anything that I may wish to go back and check out at a later time.

Socrates said that “the unexamined life is not worth living.” As I look back at, particularly my daily training habits and routines, I can see that through uncertainty I would search, steal and pillage and, that I was desperate, driven and motivated enough to stick to a lot of the tricks and habits that I borrowed until eventually a lot of them had become unconscious routines. I’m certainly not as unsure as I once was but I recognise that that confused young boy will always be a part of my make up and, around the area of being fatherless, I know that I’ve been very fortunate to have had some fantastic role models over the years, many down the Judo avenue. I’ve also seen enough young men whose dads were/are, for want of a better word (everyone has their reasons), dickheads, and the affects that that has had on them; when I see that it helps me to feel grateful, to feel the lucky for all the early pain and frustration because today I can recognise that I have a choice, I can work a “conscious programme.” I can, sometimes with help, examine how I go about things and choose what I would like or need to change. In some areas I’m learning to take more responsibility, in some I still occasionally spit the dummy out and, in others, I’m improving well.

Today I understand that I have a choice in most things. I also know that I alone am accountable for those decisions but, that real liberty, lies in responsibility.