Own Every Inch: Slowing Technical Training Down 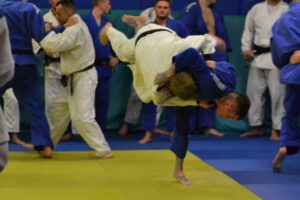 After the London 2012 Olympics I sat down with my coach and it was discussed that I was going to have to get better technically, I had a couple of techniques that I could score regularly in competition but, I needed to broaden my repertoire and get at least one or two techniques that I could score on anyone. That was the thing to aim for at least.

I’d always been a million miles an hour until that point, ‘slowing down’ was definitely something that didn’t come easily to me but, with persistence and guidance was something I did begin to improve at.

Not too long after that discussion I had my arm broken trying to escape an armlock so was out of competition for 6 months following reconstructive surgery. Our chairman and head strength and conditioning coach at Camberley Judo Club, Ben Rosenblatt, was based at the intensive rehab unit at Bisham Abbey’s National Sports Centre at that time so, I was lucky to train more regularly with Ben through that period. Again, I’d always gone at weight training like a bull in a china shop, regularly sacrificing form for more weight on the bar. Ben slowed me down and, under his guidance, I improved greatly with my weight lifting technique during those sessions. One line that Ben said during that time that has stuck firm was, “Own every inch of the lift.”

If my memory serves right World Champion Neil Adams discusses in his first book, A Life in Judo, about his father talking to him about technical training, how he needed to be absolutely meticulous with it. Again I was 13 or 14 when I read the book and no longer own a copy but, I’m sure Adams said that his dad was a carpenter, and regularly talked to him about ‘crafting’ his skills. On thinking about Ben’s “own every inch of the lift” that related memory from Neil’s book came back to me. I worked as a plasterer for a few years before becoming a full time Judo player, the idea of ‘a craft’ was something I could easily bend my mind around.

When beginning plastering rushing is the last thing that is encouraged. Obviously later on down the line you have to work quickly as the bloody stuff is going off (setting). When learning though, I was always given a small space, usually a cupboard (nowhere on show) and told to take my time but to get it right. My first boss was a perfectionist and would scrutinise all the minor little details, coincidently my tutor at college had also taught my boss and was very similar, probably the first time I had seen the effects of coaching and styles passed down through different generations of people. To put that into Judo terms Darren Warner was national junior coach when I was a junior, I remember Darren saying something along the lines of the importance of slowing things down to ‘let the body learn the movement,’ it often makes sense in the head but keeping it slow enough to let the body learn the motor skills of the technique can be very important. I’m looking forward to reading Darren’s book on skill acquisition in Judo when it’s released.

There are so many examples of actual techniques that I could use here but the one I’ll use is koshi-guruma (hip wheel). I had always been guilty of jumping to finish the throw off, jumping and rolling over the top of my partner which looks good but isn’t the most effective way to train the technique. I see a lot of young players doing similar. There is nothing wrong with rolling over the opponent on completing the throw but it is at the very end OF the completion of the technique, it shouldn’t be used to try to COMPLETE the technique. Let me try and explain. I did some work with the highly successful Mark Earle on this many years ago. Using koshi-guruma Mark basically eradicated that commonly used idea of ‘turning the head’ to finish a forwards technique. Mark had us stand still and turn our heads which became apparent wasn’t going to do anything. He then went on to discuss that it is the rotation of the shoulders that finishes techniques like koshi-guruma; sometimes the head turns at the end of the shoulder rotation but that is almost an inconsequential byproduct. The idea of ‘turning the head’ not being good enough nor technically accurate.

That session with Mark helped me see that jumping and rolling over my partner to finish a technique was very different to rolling over at the very end of the shoulder rotation. The latter being of preference from the two every time. Obviously in contests some finishes end up a bit scrappier, which is fine, but the technique in technical training should be aimed to be trained as close to perfect as possible. I now aim to stay standing when finishing techniques in practise as much as is possible. Actually, never mind rolling over my partner I’ll likely fall over them after this covid layoff!

Again, I have hundreds of examples that I could use to point where I realised I could close another inch on a technique but that scenario with Mark is probably the one that is most prominent in my mind and, was incredibly formative to the way my approach to technical work became. I’m certainly no technical master but I feel I have come a very long way with it since the London Olympics.

I was practising uchi-mata (inner thigh throw) a lot again in the period before the first lockdown. I had been incorporating elements of an old exercise my first Judo coach, Roger Houston, used to have us do as kids. Using o-goshi (major hip throw) Roger would have us get our hips across our partners, load them up then, if possible, both of us would let go with both hands so that my parter would just be balanced on my hips. For a bonus point Roger would ask tori (person executing the technique) to stand on one leg. Obviously you’d never do this sort of thing in contest but it was great practise for balance and control. So, back to the uchi-mata, I would aim to do a fair number of the throws as slowly as I possibly could, literally trying to do them in slow motion. I tell you what, I don’t think I’ve learnt more about a technique in such a short period of time. I found it  so helpful for self analysis and ironing out the little blemishes; angle of sleeve pull, foot position, do I need to get the buttocks involved more? If you smiled at the word ‘buttocks’ there, grow up 😉 I then began to threaten and score with the technique more and more in randori, which then forced people to react creating further windows of opportunities for other attacks.

Anyway, that was an enjoyable rambling on my approach to technical training, I’m sure I can speak for many in saying I can’t wait to get back onto the mat and back to work with it all.

Sign up to get my FREE weekly newsletter, Judo’s Weekly Weigh In, including these articles, straight to your inbox!