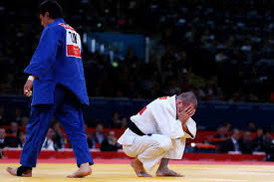 A book that I came across, and read, during the earlier lockdowns was the intensely powerful What Made Maddy Run by Kate Fagan. I read the full book in two hits, I found the messages in it so strong. Elements of it keep cropping up in other things that I’ve been reading and listening to recently.

I’ve also been an avid listener of my friends, Tom Reed and Aaron Turner’s podcast, More Than A Fighter. In Euan Burton’s episode Burton talks about training with World Champion Graeme Randall as a young player and, a discussion that he’d recently had with his coach, Billy Cusack, where Billy lays out the concept of ‘the game within the game.’

The line that I’ve taken from What Made Maddy Run for the title of this post and, Cusack’s ‘game within a game’ idea encapsulate what can be an extremely important thought process for younger (and older) Judo players.

What Made Maddy Run is the tragic story of college athlete Madison Holleran, who committed suicide at the age of 19. The book is a look at Madison’s personal story and how it reflects on evolving elements in society; pressure of success, social media, people’s reliance on technology and, the unhealthy levels of connection that that technology can lead to. Madison was a winner in high school, finishing first in most things she applied herself to, however, on reaching Ivy League college level, the competitiveness is so much more fierce, there are older and more developed students and, a wider, higher quality talent pool. Madisons coaches discuss in the book how she was improving and the clear gains she was making. Unfortunately for Holleran it was much, much more black and white, she either won or she lost and, up against far higher competition, although her placings consistently improved, she lost. As much as her coaches tried Madison just couldn’t acknowledge and accept the improvements as success, she failed to top, or even reach the podium so, in her own mind, was failing.

Euan Burton talks about doing randori with Graeme Randall as a junior and how Randall would throw him all over the place initially but, slowly, he would begin to catch him every now and again, to then, being able to score on him, even if caught himself, most practises. The trick, ‘the game,’ there being able to see the successes within what is going on, even if the majority, or the outcome, doesn’t go your way.

If I analyse my first few years of being a senior Judo player I was more on the line of thinking of Madison Holleran, it was a win or, it was a loss. I can laugh now when I think about a number of the players that I lost to in that period, and how furious and devastated I was. I can analyse Judo and my own abilities far better now than then and know that those players were simply just much better than I was but, I didn’t win, so I was mortified.  My coach always told me I was improving, would provide evidence that I was improving but, I guess I just needed to experience enough pain, via losing over and over, to be willing to look at it from another angle and, for people to not give up on me when I would spit the dummy out, to give me the time and support to gradually unpick things. To put it simply, to change.

From a Judo perspective we see it all the time, successful cadets and juniors that, when they get into the senior ranks, struggle with not medalling at every event and end up walking away from the sport. Being male I will exclusively discuss mens Judo here; occasionally there are British players like Craig Fallon that make their mark on the senior world stage quickly but they are the firm exception. For the majority it is a gradual process of improvement, and that is okay. Maintaining faith (from all involved) and being able to see the small but consistent improvements, be it technical, tactical, mindset, gym, placings and medals can be hugely beneficial and important. Not that winning quickly should be discouraged of course, on the contrary, it’s the very objective of competitive sports people; win as soon and as much as possible. Methods need to be in place though for those individuals that are doing everything that they can but might not be finishing on the rostrum yet. When I look back at my own progression, although I haven’t been a major medallist like the previously mentioned men, there were also clear result based stepping stones too; senior national medal, winning a contest or two abroad to then winning continental cup medals, then continental open medals and then getting into a Grand Prix medal fight. They were all useful targets to aim for, up a level stage by stage, step by step.

Although slightly off point but very much related to an element of what I’ve been discussing; I said in one of my recent posts that from all the great coaches that I’ve been fortunate to have worked with and observed they are masters at keeping people in the game, they have an endless list of methods to install and maintain motivation. For me, I look at those coaches, and they get high level results out of those talented young individuals that are under their care but, at the same time, can pretty much match those results with people that may initially lack talent but that, with expert direction, are willing to go through that developmental process. If we take the only two British men to have fought for a major (European, World, Olympic) medal this Olympic cycle, Camberley Judo Club’s Ashley McKenzie and Frazer Chamberlain, both coached by Luke Preston; McKenzie was a high achieving junior who became a high achieving senior whereas, Chamberlain, who didn’t exactly set the world alight as a junior, yet, through staying in the game and working hard under excellent guidance, has slowly but consistently climbed up the senior ranks.

While on that previous point, I also discussed in another recent post about how the infectious passion for Judo is also installed by the coach. It is not surprising then that David Somerville, Sarah Clark, Euan Burton, James Millar, Matt Purssey, were all players under Billy Cusack, who are now coaching or have coached. They’ve stayed in the sport even after finishing competing, something very important in recent times where numbers of Judo participants in the country, of all positions, levels and abilities, have been decreasing. Billy was himself a full time player under British Judo legend, Tony MacConnell. Luke Preston and John Buchanan both trained under the highly successful Mark Earle at Camberley, both are currently coaching, Luke now running Camberley.

Great coaches don’t just churn out medal winning players, they produce the future generations of coaches. They play a significant role in keeping the sport we all love alive.