How Sparring With Kids Can Improve Contest Judo 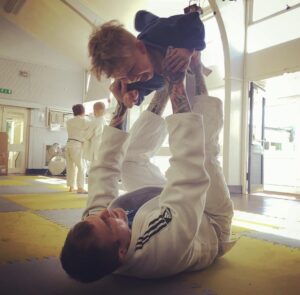 Before I became the kids coach at Camberley Judo Club I used to lead a number of schools Judo sessions for my friend Alan Scott, at AS Judo. Alan would always say, “make sure you do some randori with the kids!” Although I’d be pretty knackered most of the time as, in that period, I was still fully following the full time programme at Camberley; most days were a training session at 10am, a training session at midday, 60 minute drive to High Wycombe, teach for Alan for a couple of hours, 60 minute drive back, randori (sparring) at 8pm. Nevertheless, I’d always do some randori with the kids. As I’ve touched on before, when I was a kid, like so many, the passion for Judo was something given to me by the coaches I learned from. I loved doing randori with the coach, everyone did, we’d all rush over to be his next partner.

Grip fighting is obviously a very prominent element of contest Judo, Camberley has it’s own system around kumi-kata (gripping) that has been taught for many years. A small detail of that system is, when fighting a same sided opponent, right hander for me, if I have only my right hand on the collar I cannot linger, my opponent can quite easily go over towards my belt or turn in for seoi-nage (shoulder throw). I had been lingering with that grip while doing randori with the kids and then, by accident, did it a couple of times that evening at Camberley and got duly punished for it. From then on, even with the kids, I’d stick to the Camberley system of gripping, obviously the intensity is minimal and I’d still let them throw me but I found it a good way to drill it into me; it was actually good practise against a moving opponent, better than drills with a compliant partner to be fair. Gripping has been one of the strongest elements of my contest Judo, being disciplined with it, even when doing randori with young kids has helped in it’s development.

In my younger senior career I liked and practised mostly physical style techniques, modern pick ups, arm wraps and, dominating for sumi-gaeshi etcetera. After the London 2012 Olympics it was very clear that I was going to have to get better technically so I began to look at some more traditional style throws too. A lot of my attacks were still direct, dominate the gripping then fire in. Literally by default, I began using the ‘Twitch’, faking a forwards attack to get the opponent to react so that you can go behind to throw backwards. This came about almost randomly through practising with the kids in randori. I’d been playfully teasing one of them saying, look behind you, he’d look behind him and I grabbed his sleeve and say, “tricked you.” I had been shown the Twitch technique before by my coach in group technical sessions, Mark Earle had broken it down to us at one stage previously too but, it wasn’t a technique I pursued. It’s funny how that happens sometimes, a situation permits of forces something out of you that you hadn’t actively sought after. Anyway, after tricking the lad to grab his sleeve I then begun to twitch him, shouting “tricked you” every time I made him react. He was creasing at the fact he couldn’t stop himself from reacting! I can literally remember the session, it was a Thursday afternoon at Great Missenden school. That evening on the randori session at Camberley I found myself in the position for the twitch and had thrown my partner with it before I really knew what had happened. From then on it has been a technique I’ve actively practised regularly, it’s definitely not my main weapon but I have scored it increasingly more in randori. I’m looking forward to getting back on the mat, when we can, and hunting it out some more.

I also found that because the kids are so reactive, practising small reactions with the feet work well, something fighters favouring techniques like uchi-mata utilise effectively. Small reactions giving opportunities for big finishes. Useful also for making a defensive opponent look all the more negative.

Initially, it used to annoy me when coaches would say that there is always at least one thing you can practise with any style, size or, experience of partner. The longer I’m involved in Judo the more I see just how right they were.