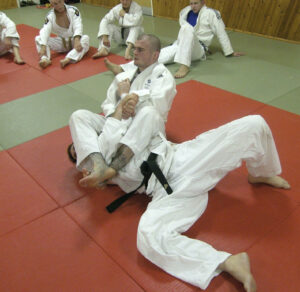 I grew up in the rural county of Shropshire. I largely attribute my lack of technical development at a younger age due to my own 100 mile an hour pace in everything that I did and, although the club that I spent my first decade involved in Judo at had a wide membership base, with kids that did regularly partake in some competitions, it is more of a ‘recreational’ club. Our coach at the time there, Roger Houston, installed a passion for Judo in all of his students. Both Sarah Adlington (Tokyo 2020 Olympian) and I started at the Bushido Judokwai with Roger.

In 2009 I left a plastering apprenticeship to relocate and begin full time training at Camberley Judo Club. When I joined the club I asked about work in the local area as, I had some savings but, was aware they would relatively quickly dry up. I was actually offered a position helping out with the club’s Judo in schools classes which I began almost immediately. I coached in the schools for around ten years before I was offered to lead the kids and recreational senior sections at the club itself. Camberley has always offered a great natural development of players and coaches; Luke Preston has always encouraged us to become qualified coaches, and then run sessions. Places like Camberley, The Edinburgh Club in Scotland and, Bath University, have always had a conveyor belt style system; keeping players going into maturer ages, getting the most out of all the years of investment then, transitioning them into coaching when their competitive careers eventually come to an end.

Particularly with the recreational seniors, I really believe that coaching has helped me to gain a far greater understanding of the technical elements of Judo. Not that I’m a master, but from where I feel I started to where I am now, the mixture of being full time at Camberley and consistently coaching alongside my own training has pushed that understanding on leaps and bounds.

I’d been doing Judo regularly for 15 years before I started any real form of coaching. I quickly found that even with my favoured techniques I couldn’t fully articulate what I was doing accurately, nor break them down and demonstrate them precisely. Basically, I didn’t fully understand them. I actually see that in a lot of high level players, because I’m single……unsure if these two things are related….I still find myself watching youtube tutorials on a Saturday night; certainly not all, but plenty, of world class players will explain a technique they do slowly and then, when they come to demonstrate it at full speed, it looks totally different. Doing isn’t always understanding and, a part of why great players don’t necessarily always make great coaches. Without going too far off point, I see demonstrating technical or tactical elements accurately as ‘teaching.’ From my observations of great coaches it appears that ‘teaching’ is only a tiny part of the coaching process. Again, just because someone can deliver stuff well on the mat doesn’t necessarily make them a good coach, there seem to be so many more elements to it.

Anyway, after a few attempted demonstrations where I couldn’t get my words out I then began really doing my homework on the techniques that I would show. I have a lot of kyu grades on the mat so, a lot of the stuff I deliver has to be geared towards grading requirements and, initially, wasn’t necessarily things I’d personally use in randori or contest. I actually found it quite enjoyable doing the research and feeling a bit like a beginner again. I then began to find I’d score some of the techniques in randori, a few even in international competition. Being forced to be critical with what I was demonstrating rubbed off in my training too, it helped me to attempt to examine every inch of what I was doing to see how I could make it better.

One of the other things I find with coaching is I am actually watching a lot of Judo which naturally gives a greater time for observation and reflection than when training myself. I’d see many clear things that I knew that I personally needed to scrub up on e.g I’d watch kids trying desperately hard to throw forwards and, not reading that a rear technique would be much more applicable with the opponent’s reaction. In a few cases I’d also see young fighters lose their temper, which I used to be very guilty of…..I’m an angel now….. and how they would get caught more and more the angrier they became. Seeing people be too intense in technical training and treating it more like a workout helped me begin to see that technique is craftsmanship, it should be done slowly until really picked up and understood.

I was asked by my friend Vince Skillcorn to go on his Judo Talk podcast a couple of months back. Vince asked me how I saw myself now, a player or a young coach. Honestly, I’d never really thought about it and, have never seen them as two different things. I just see myself as a Judo person. I haven’t yet come across an area of Judo that I don’t enjoy or find interesting, even Kata……yes, I should probably try that ‘sex’ thing people refer to at some point 😉

There are a lot of great Judo people in the British Judo community. Of the ones that I really look up to, they do it all.