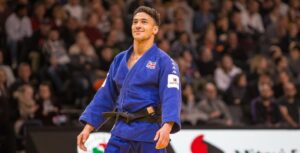 To drive the point home that I repeat frequently in these blogs is, when commenting on coaching, I am coming from the perspective of a maturer senior player. I do coach but senior international level is miles away from where I am currently operating. For me, I believe that the old school knowledge of the importance of a great coach can, at times, be lost in the obsessing over, and discussing of, programmes, systems and such things. A pattern that has clearly emerged, and been pointed out to me a number of times, is that if someone hasn’t worked with a truly great coach they often remain blindly ignorant to the importance of it. It is no coincidence that 4 of the 5 British men that have medalled at the World Championships since the break up of the soviet union (all between 1999 and 2007) have come from 3 coaches, the fifth male also working closely alongside one of these coaches during the time he achieved his major medals. Traditionally great coaches naturally provide excellent training partners as many serious players flock to work under their guidance. Again I repeat, the coach is the most important element of all to a Judo player.

Particularly in countries where women’s and men’s Judo are able to boast a good number of participants, one marker that I have absolutely come to trust of true and highest coaching ability is, there being little disparity of level in that coaches male and female results. In relation to this post, I believe an element of that is that there are certain traits that can be common in each of the sexes individually, great coaches, from what I’ve seen, can navigate all. The understanding of people, vital.

Over the last couple of years I have contemplated my future in Judo more, I think only natural seeing as I am in my early thirties. I’ve discussed my frustration at external elements before, the desire (sometimes strong, sometimes fading) to continue putting myself through all the training, the self-funded lifestyle, etcetera. Considering staying on as a maturer athlete reminded me of a line I wrote in my training diary when I was 18, when I started to see plenty of my peers dropping out of the sport, “No one wins a medal sat in an office.” To high performance I think that the absolutely most critical thing is to keep players in the game. All opportunities are eradicated the minute that person hangs their Judo kit up. Keeping players on the mat, from observations, is largely influenced by the coach. My current decision to stay involved  in Judo is under-pined by a huge amount of support still provided by our coach at Camberley, Luke Preston. I know it’s similar for the other maturer athletes at the club too.

I discussed recently how, when being removed from funding for not centralising, Luke stepped up and kept me, and others, from walking away from the game and, something that has become more apparent from hearing the honest shares of others, from going off the rails completely. Luke has helped me personally in many other areas and, when he’s felt it necessary, sourced external aid too. He’s done that for plenty. I suppose when I look back throughout my serious competitive Judo career I have had a number of strong personal coaches, most prominently, since 2009, Luke, through my entire senior career at Camberley but, also, Bill Kelly, while I was a junior at Wolverhampton. Particularly with those two I felt absolutely supported; they had my back through thick and thin. Personally, I never knew my father growing up, which made me very angry and somewhat unsure. Although very loved and supported by all my family, as a maturer player I can now see that my coaches have provided the good and stable male role models that I was so desperate for. Both have fantastic understanding of people skills and how to connect with people, that’s a trait that I see throughout all those club/personal coaches still turning up to domestic events week in week out. Over the pandemic I have done some (paid) work with kids that are disengaged from education. Honestly, I see so much of my younger self in the teenage lads; it makes me feel so grateful that I had, when in a similar same position, Judo as an activity to throw myself into and, most importantly, the people it provided me access to. I got in trouble with the police a couple of times as a youngster and, with the support of a loving family, Judo absolutely contributed to me walking a more positive path than one I perhaps could have.

I keep loose contact with Chris Bowles. Chris was chatting to me about Judo related stuff a while back and he said a line that stuck with me, “If you’re looking for a decent Judo player that doesn’t come with a bit of baggage then you’ll be looking for a long time.” For all the players and coaches that I have close contact with that statement rings very true. My good friend, and team mate at Camberley Judo Club, Ashley McKenzie has discussed many times how Judo has very probably kept him out of prison. Obviously there is no such thing as a perfect human being but, there definitely seems to be something that drives most serious Judo people I’ve ever know, it can appear in different forms and come from differing roots but, something always seems to be there. It often pains me to see some individuals overly sport science-esque expectations of athletes, to be perfect and live perfectly, that’s not to say that discipline and lifestyle aren’t important but, a lot of the time it is far removed from the reality of the full process and personal journey a player goes through. From what I’ve seen with those top coaches they successfully navigate many of the behaviours that can accompany an individual that wants to fight everyday and, that makes chasing a medal their number one priority in life. Sometimes this may be reining them in, sometimes this might be giving that person some leeway if they are working through something, whatever it is they often seem to handle the situation well. They understand group dynamics too, building and maintaining a team, dealing with any issues that may arise from within it.

Particularly when a player arrives in a full time training environment, many hours are spent with the coach each day. For years on end. They quite literally become like family. For me and most other serious players that I’ve talked to, the idea of the coach-player relationship being merely transactional is not enough. I again find those that believe that those relationships between players and coaches can be treated as transactions typically never committed to and worked under a truly quality and dedicated coach. The emotional understanding is seldom there. Personally, this was one of the major contributing factors for me not to centralise, I had formed an immensely strong bond with my coach and felt happy and supported.

I’ve previously discussed how valuable I find it to have Luke there on a daily basis, obviously following what he delivers but also being able to run anything by him. Again, as I’m in the twilight years of my own competitive career I speak to Luke more and more about coaching. For a long time I suppose I followed quite a typical way of thinking that to be a truly understanding and successful coach one should first run a club and work their way up through the age groups. I relayed that thinking to Luke and he, gently, partially debunked it, the first bit at least. I wrote the gist down of what he said a few hours later so I may not be quoting exactly accurately but, the one thing that shone through the most was something along the lines of, “You don’t have had to run a club to be a successful high performance coach but, you do need some of the attributes that are most common in club and personal coaches.” Listening to Billy Cusack on Neil Adams’ podcast again strengthened that for me, Cusack, one of Britains most successful coaches to date, discusses how he has, to a degree, almost done coaching backwards; starting with high performance and now owning and running The Edinburgh Club. Obviously a lot of players do start with some coaching in schools or clubs but, that conversation with Luke helped me move away from the idea of having to run a club for say 15 years before progressing further.

After that chat with Luke I began to really think about what I thought those attributes of club and personal coaches are that are required for high performance. I then wrote them down. There are two sayings that sprang to mind as I began to put pen to paper, “It’s not always what you do but how you make people feel” and, Mike Tyson’s “A happy fighter is a dangerous fighter.” I thought back through all my years in Judo and how my club coaches had made me feel; cared about– personally and in my outside life-regardless of results, supported– in many ways, backed– stuck with me through good and bad, happy– I enjoyed their company, safe– I trusted them and their intentions, shared passion/goal– their obvious love of the sport. From what I see all truly successful high performance coaches make their athletes feel this way. Some grow apart after finishing competing but, during the fighting days at least, those things seem to be apparent, and in volume. A powerful belief in the coach is always there. Of the handful of other coaches that I have enjoyed spending time with as a senior I felt similar things. Again, from observations, there appears to be a baseline of technical and tactical knowledge required to make a successful coach yet, I have seen many people that have fantastically technical and tactical minds yet fail in human interaction and, don’t get the best of their players; at the same time I’ve also seen plenty with more limited mat based understanding but are fantastic leaders, abundant in motivational skills, and achieve great things with their athletes. Obviously having both the technical and tactical knowledge and brilliant people skills can lead to a truly great coach but, so it appears, without quality interactional skills and human understanding success will always be limited.

Again, I believe those individuals that overly prioritise such things as programmes and systems miss to see that such obsessions often fail to account for those vital human elements. Great coaches seem to have so much emotional understanding and intelligence and possess the likability and motivational skills to take players the full distance. They get people.

At the end of it all, that’s what everything boils down to, people. Having the right ones there and the many interactions between them.

People themselves are always the answer.